With Twitter, accounts are generally (although not always) run by a single person. However, unlike Facebook, Twitter does not enforce a “real name” policy, which makes it easy for one person to run multiple accounts, and to run accounts under different names. In fact, an important part of Twitter culture is the constellation of parody accounts, bots, and single issue accounts that amuse and inform Twitter subscribers.

At the same time, it’s easy to get confused. As an example, consider the account of Representative Jack Kimble. Here’s a typical tweet:

If you’re a liberal, looking at this tweet may get your blood boiling. How can anyone possibly believe this? Especially a Representative? 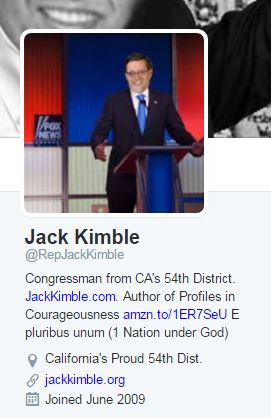 Here we see that he’s from the 54th District of California and he’s got a book out. Now if we’re reading carefully we might notice some fishy things here: his book, Profiles in Courageousness, seems like a parodic re-titling of Jack Kennedy’s Profiles in Courage. “E pluribus unum,” which means “From the many, one,” is translated to “1 nation under God”.

Oh, also: California only has 53 districts.

Unfortunately, you’ll likely be in such a huff about the comments that you won’t notice any of these things. So what is a general purpose indicator that you need to slow down? In most cases, it’s going to be the absence of a “verified account” marker.

As a counter-example to “Representative Kimble,” here’s a real representative, Jason Chaffetz, from Utah’s 3rd District. 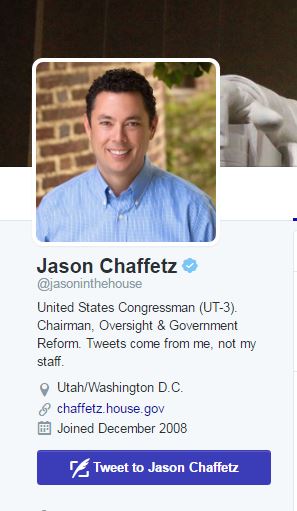 That little blue seal with the check mark (the “verified badge”) indicates that this is a “verified identity” by Twitter—Twitter asserts that this person has proved they are who they say they are.

Who gets to get verified? It’s a bit unclear. Twitter puts it this way:

An account may be verified if it is determined to be an account of public interest. Typically this includes accounts maintained by users in music, acting, fashion, government, politics, religion, journalism, media, sports, business, and other key interest areas.

However, all members of Congress and senior administration officials qualify for such status. So do most major public figures and prominent writers. If you don’t see the blue badge, either disregard the tweet as suspicious, or do further research.

One additional note: sometimes people try to fake these indicators; an example is faking a verification symbol in a header. 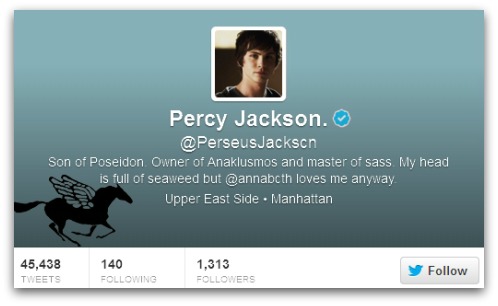 This user has used their background image to place a verification badge next to their name. To steer clear of these sort of hacks, always view the badge in the sidebar or small “hover” card, not the header. To be extra sure it’s legit, hover your cursor over it– the words “verified account” should pop up.

This sounds complicated, but once you learn it, it takes maybe two seconds. Here I am, for example, checking to see if this is really New York Governor Andrew Cuomo’s Spotify playlist, or a fake account, using a quick hover technique:

In this case it’s verified. The governor should probably lay off Billy Joel a bit, but this is a legitimate tweet.

Not all celebrities have verified accounts. If you don’t find the verification badge, you may have to dig a little deeper.

There are a couple things to look for in an unverified account: 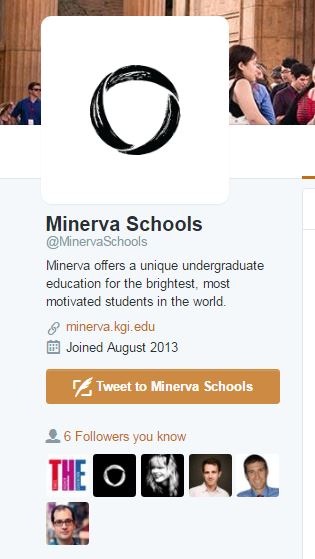 A number of things suggest it is. It was created in August 2013, right around when I know Minerva was created. It has followers I know (from educational technology, which is what the school is known for). One of the followers is a person that I know that works there. 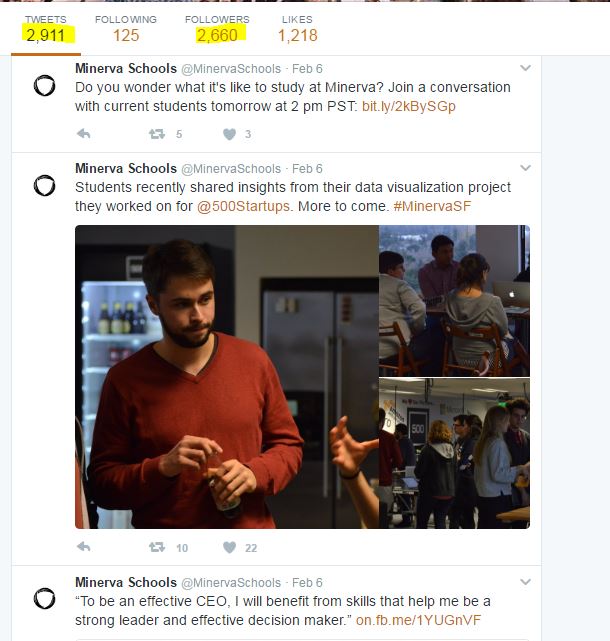 We could stop there, or we could also note that the tweetstream is entirely consistent with what we’d expect for an organization like this, and the number of followers, while not huge, is in line with what we might expect for an account like this.

No one single factor here clinches it (although the employee showing up in the follow list comes close), but all these factors together give us a fair amount of confidence that this is a legitimate account.

If we wanted to go one step further (and we really don’t have to here) we could web search the handle and see if it is referenced from any official pages.

Not all tweet screenshots are fake. Many times Twitter users will screenshot a tweet rather than retweet it because they fear the original will be deleted. Here’s Michael Li screenshotting an embarrassing tweet which was later deleted. 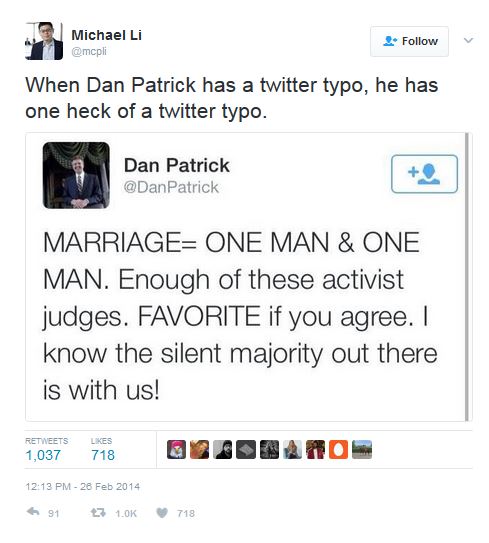 Other times, people may screenshot a tweet because they wish to discuss a tweet without attracting the ire of a particular group of followers. As an example, during the #Gamergate controversy many people critical of Gamergate took screenshots of bad behavior on Twitter (harassment and the like) because they were afraid that if they commented via re-tweeting they might become a target themselves.

Sometimes people retweet screenshots as a way of breaking a chain of credit, so that people will be forced to retweet them, and not the original tweeter. (This practice is rightfully frowned on).

Sometimes, however, the screenshot may be fabricated. In fact, many “tweet generators” exist online that allow you to create fake pictures of tweets. I made this one a couple minutes ago: 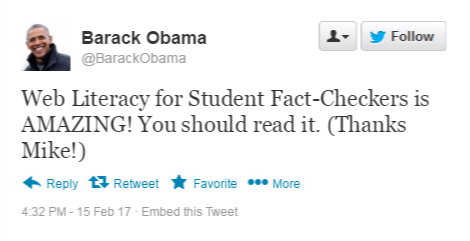 If you come across a person re-tweeting a screenshot, check to see if the tweet really exists on Twitter first. In the above case, for example, you could check Obama’s timeline.

What if they deleted the tweet, as in the “ONE MAN + ONE MAN” example above? How do you verify it then? Or what if the tweet someone was referencing has since been deleted.

Don’t worry–in many cases there’s still ways to dig up the tweet.

If it’s a tweet from a politician (and it usually is) you can try Politiwhoops, which logs all tweets deleted by significant public officials.  Here are some tweets recently deleted by President Trump: 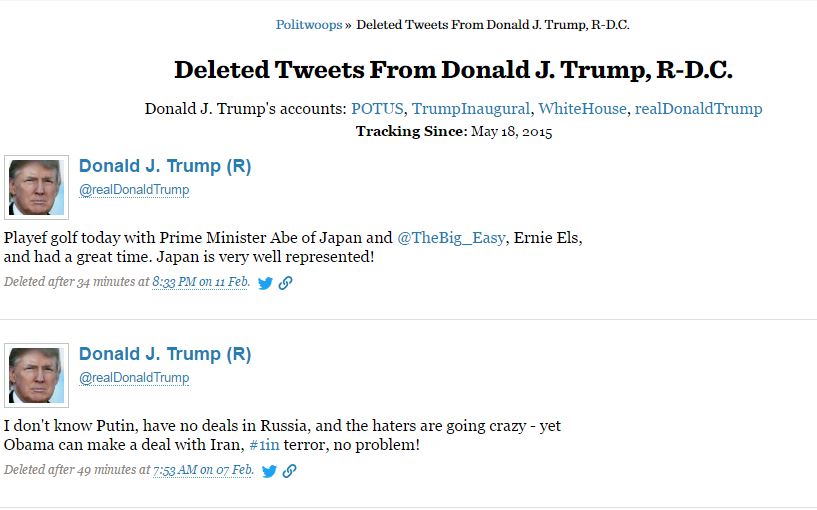 The Twitter bar sometimes obscures the cache information, but if you can see it, it will tell you when it was last indexed. The time is in Greenwich Mean Time (the same time as London, England). So for instance, this cache of Trumps tweets was taken at 2 o’clock London time (which would be early this morning in my Pacific Coast time).