While more recent news articles are available from both Google‘s and Bing‘s news search tabs, older news can be more difficult to retrieve. Many options for retrieving old news entail paying a subscription fee or per article cost, which is a bit expensive for a person just checking up on a story. In this section, we’ll show you how to use news archives to check on the existence of articles at no cost.

President Trump claimed the investigation to see if his campaign had colluded with Russia was a “witch hunt.” No sooner had he said that than this snapshot of an article appeared in my feed: 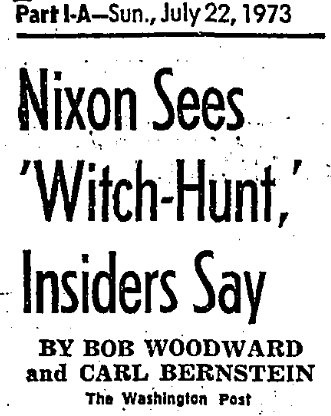 By now you should know it’s trivially easy to fake something that looks like a snapshot of an old headline. So how do we find out if this article actually ran?

Our first instinct might be to go to the Washington Post to see if they have this article. That’s not a bad instinct, but in this case the headline clearly ran somewhere else other than the Post–the Washington Post doesn’t tag it’s own articles as coming from the “Washington Post.” This particular headline was run in another paper.

So we want to do a broad search across many historical American papers. When reporters do this, they most often use tools such as LexisNexis and ProQuest, which are usually unavailable to average people.

We’ll have to make do with sources that are searchable from the web. There are three major web searchable archives in the U.S.:

Google offers complete articles. The other two offer snippets unless you pay them money, but snippets are enough for this sort of task.

So we construct our search. It’s just a variation on the “site:” syntax we’ve used elsewhere.

And we get back a time-stamped result from the LA Times, with a date (in 1973) that looks promising: 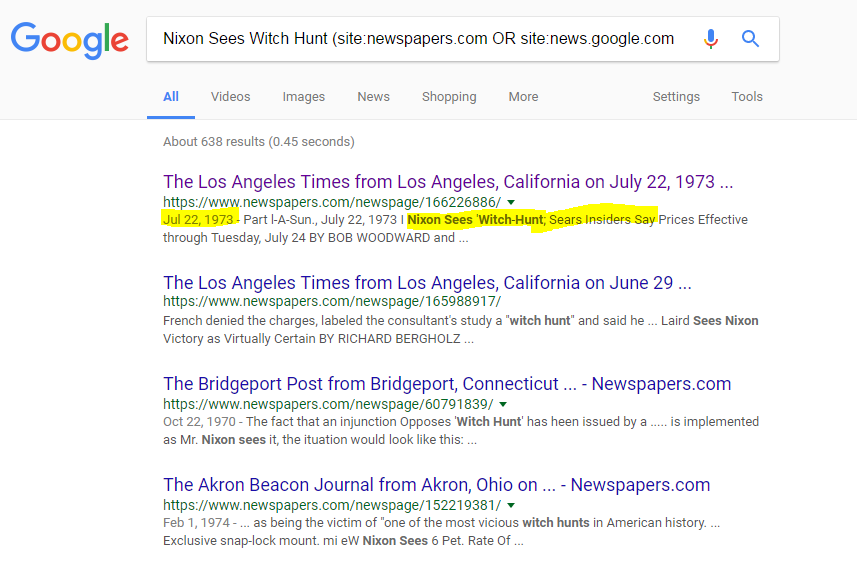 It becomes evident when we click through and look at the page: 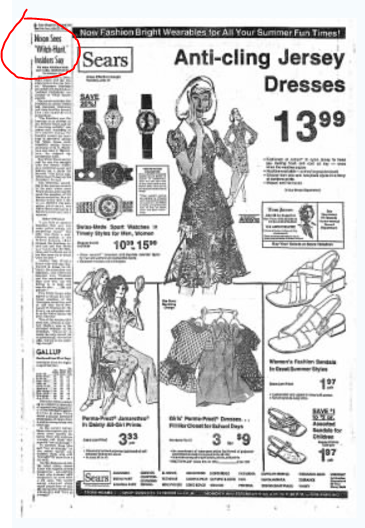 You can see above we’ve circled the headline. The free version only offers this blurry “thumbnail” image of the page, but it’s enough to spot the headline. It also makes obvious where the “Sears” came from–the text here was automatically generated by computer and must have included the Sears ad next to as part of the headline.

If we scroll down the page, we can see enough to confirm that this article as I saw it in my feed was correct, even though the automatic character recognition has messed up a lot of the words:

Part l-A-Sun., July 22, 1973 I Nixon Sees ‘Witch-Hunt; Sears Insiders Say Prices Effective through Tuesday, July 24 BY BOB WOODWARD and CARL BERNSTEIN Thft Washington Post WASHINGTON President Nixon and his top aides believe that the Senate ‘Watergate hearings are unfair and constitute a “political witch-hunt,” according to White House sources. The sources, said, that the President .in recent weeks had expressed bitterness and deep hostility toward the two-.morith-old proceedings.

We have enough here to say that this ran in the LA Times in July 1973. And if we really wanted to see a clean version of the article, we could subscribe to the service and grab a better image, which may be what the original tweeter did.

Here’s another paragraph, this time from the New York Times, that claims the LA Times ran a derogatory headline when the first female commercial pilot at a major airline got her wings.

There were no female pilots at the biggest airlines until 1973, when American Airlines hired the first, Bonnie Tiburzi Caputo. In a reminder of how times have changed, that news was reported in The Los Angeles Times under the headline, “Airline Pilot to Fly by Seat of Panties.”

The New York Times is a very reliable paper, and in this case we probably don’t need to check the article title. But let’s try anyway with the same sort of search as above:

Note that because the optical character recognition sometimes transcribes things wrong, we don’t put quotes around the search phrase, at least at first. When we put it in, we’re in luck–we can see the headline in the blurb: 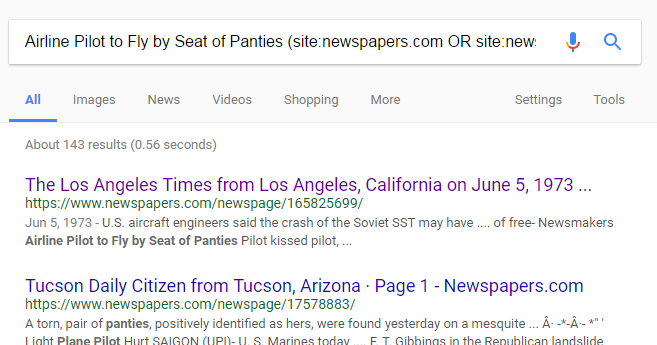 We execute a search for:

and we get an article from 1975, which talks of some sensationalist claims of a coming ice age. But when the reporter talks to a climatologist, the tone is different:

(Note: For some reason newspaper archive searches react badly to date filters, which is why we just put 1975 in plain text.)

If we search for “global warming” in 1975, we get this quote in the January 29, 1975 edition of the Orlando Sentinel from a government scientist:

“After the next decade or so will come a warming trend, both because of increased CO2 in the atmosphere and thermal pollution by power plants and so on. In the 21st century, man’s activities will predominate over nature.” J. Murray Mitchell, senior research climatologist, Environmental Data Service, National Oceanic and Atmospheric Administration.

While one would need much more evidence to settle the question of whether scientists on the whole feared global cooling or global warming in the 1970s, it’s clear enough that many scientists expected warming due to man’s activities even then. If you’re looking at sharing an article that says that “cooling” was the big 1970s worry, you might want to sit on it before reposting.